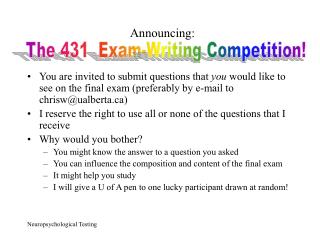 Announcing:. The 431 Exam-Writing Competition!. You are invited to submit questions that you would like to see on the final exam (preferably by e-mail to chrisw@ualberta.ca) I reserve the right to use all or none of the questions that I receive Why would you bother?

History of Health Care - . objectives. students will: identify medical/health care milestones that have led to advances

Spotted: A pregnant Shilpa Shetty - Shilpa has always been stylish - even after announcing her pregnancy. a look at what

BGP 102: Scaling the Network - . avi freedman servercentral. introduction. bgp is relatively easy to get configured and

Announcing the World Premier of the Usborne Home School Curriculum - . by debbie karstens. topics to cover. the vision