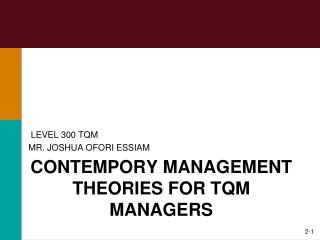 LEVEL 300 TQM MR. JOSHUA OFORI ESSIAM. CONTEMPORY MANAGEMENT THEORIES FOR TQM MANAGERS. Use of Theory. A theory is a set of assumptions or principles that have been repeatedly tested to explain or predict facts or phenomena . Theories: Provide a conceptual framework Financial Management: A Course for School Nutrition Managers - . pre - assessment. place an identifier at the top of the