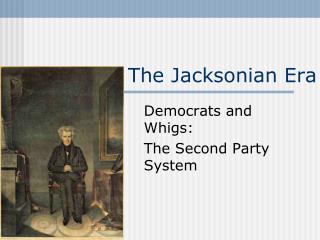 The Jacksonian Era. Democrats and Whigs: The Second Party System. The “Era of Good Feelings”. James Monroe (1817-1825) was the last Founder to serve as President Federalist party had been discredited after War of 1812 Monroe unopposed for reelection in 1820 Foreign policy triumphs: Copy the following on the first 8-10 lines of NB p. 39. - What is jacksonian democracy? how did jackson use the spoils