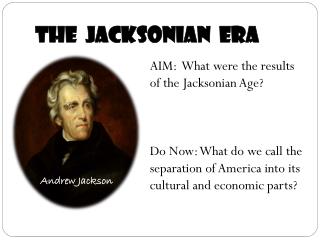 The Jacksonian Era. AIM: What were the results of the Jacksonian Age? Do Now: What do we call the separation of America into its cultural and economic parts?. Andrew Jackson. Sectionalism. ?. trade, shipping & manufacturing (Factories). blended both. .

Jacksonian Democracy– Trashball Review - . certain letters of soapstone are given… figure out what is described.

“Fires of Perfection” - . reform movements 1820-1860. usher in the kingdom of god. reform emerges in response to

Civil War and Reconstruction - . jacksonian era . the changing character of american politics in “the age of the common

RISE OF MASS DEMOCRACY - . chapter 13. politics of the people. by the 1820s democracy of all the people was no longer