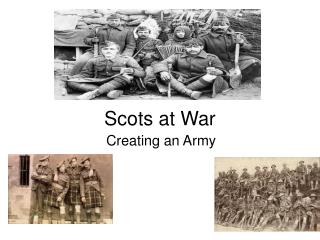 Scots at War. Creating an Army. Problem. The scale of World War One posed a massive challenge to the relatively small British Army Lord Kitchener avoided introducing conscription by inviting men to volunteer with their friends, family and colleagues to form the Pals Battalions.

HIGHER HISTORY: The Wars of Independence 1286-1328 - . issue 4 the reasons for the ultimate success of bruce in

James Maxton ILP - . john maclean sdf. you need to know: what radicalism is and how scots were affected by it. what the

How did the Scottish wars of Independence (1286-1328) form a national identity? - . comment on les guerres

Spanish Threat from Florida The War of Jenkin’s Ear - . ss8h2 the student will analyze the colonial period of

The Home Front - . this section examines how the lives of ordinary scottish people were affected by the war. attitudes to

Results of the Scottish Wars - . post bannockburn. despite being a great victory, bannockburn was not the decisive