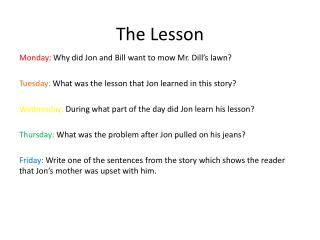 The Lesson. Monday: Why did Jon and Bill want to mow Mr. Dill’s lawn? Tuesday: What was the lesson that Jon learned in this story? Wednesday: During what part of the day did Jon learn his lesson? Thursday: What was the problem after Jon pulled on his jeans? The Lesson - . monday: why did jon and bill want to mow mr. dill’s lawn? tuesday: what was the lesson that jon learned

Closing the Lesson - . this is where students must prove that they have learned the new content. closing the lesson .

The Lesson Parts - . all teachers attending from school divisions in the svtc ed tech grant consortium have agreed to

The truss lesson - . f or people that are pretty smart. for your reference throughout the lesson:. pin. member. wall. j

The Ultimate Lesson - . aquinas college. the theme of this presentation is that a lesson is only truly the “ultimate”

The Last Lesson - Extramark is a global provider of ncert solutions for class 12th: ch 1 the last lesson flamingo

Lesson Ninety-nine The Ninety-ninth Lesson - . 点播. 1. because the boat was not safe. 2.they put it under the tree. 3.

Lesson 4: The Legislature and the Judiciary, Lesson Template