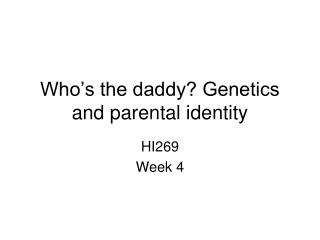 Who’s the daddy? Genetics and parental identity. HI269 Week 4. Who’s the daddy? Family identities in perspective. I. Defining the family: shaping the history of ‘kinship’ A. In law B. In culture C. In ‘nature’? II. ‘Family’ and technology in the genetic age

All in the Family - . many issues related to family life, particularly dealing with children, related to parental

Introduction to Parental/Family/Community Involvement - . concepts, meaning, theories, and models it takes an entire

GENETICS ESSENTIAL QUESTIONS: What is genetics What did Gregor Mendel s experiments discover about variations - History

Human Genetics - . behavioral genetics. behavior. some behaviors can be transmitted from parent to child. what proportion