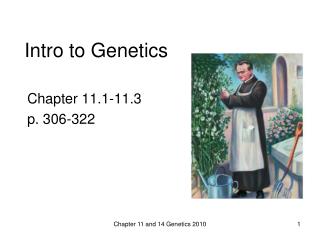 Genetics - . genetics. bell: what is genetics? study of heredity passing of traits from parents to offspring traits-

Genetics - . all your hopes and all your fears. genetics. classical genetics mendelian genetics fundamental principles

Genetics - . genetics. genetics is the science of heredity genetics explains how genes bring about characteristics in

Aim: What is genetics? - . do now: w rite in your notebook, what do you think of when you hear the word genetics? 5 mins.

Genetics - . what is genetics?. genetics is a branch of biology that studies how characteristics are passed from one

Intro: Genetics and Breeding - . let's play a game……. . i will show an “awkward” family photo. you tell me what

Genetics - . a psychological perspective. behavioral genetics. understanding how both genetics and the environment

Genetics - . what’s it all about?. questions: what we will answer . what is genetics? how do chromosomes work? what is

Intro to Genetics and Mendel Honors Biology Ms. Kim - . transmission (passing down) of traits. how? one possible

Genetics: an Introduction - . genetics: the study of heredity. heredity: transmission of traits from one generation to

Genetics! - . key learning: genetics in animal science. unit eq: why is an understanding of genetics important in the

Ch. 18: The Genetics of Viruses and Bacteria - . intro. bacteria and viruses are the simplest biological systems. most

Beyond Mendel - . into the genetic frontier. mendel is the tip of the “genetics iceberg”. mendelian genetics. as

FUNDAMENTALS OF GENETICS - . chapter 8. genetics. genetics is a field of biology that is devoted to understanding how