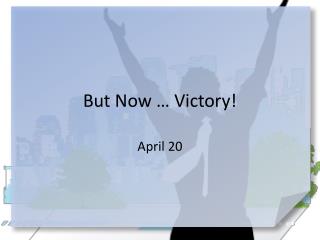 But Now … Victory!. April 20. What do you think?. When you hear the word “victory” what event or person comes to mind? Consider that Easter is the “Super Bowl” of all Sundays! Jesus was/is victorious over death Because of the resurrection, nothing can defeat you – not even death!. Blackhawks win Stanley Cup - The chicago blackhawks win their third stanley cup in six years, with a 2-0 victory over the

CINCO DE MAYO - . alas. what is cinco de mayo?. cinco de mayo translates into the “fifth of may” it celebrates

Habit 4: Think Win-Win - . main idea of chapter what not to do: win-lose: the totem pole lose- win: the door mat

Victory in Afghanistan: The Need for a New Strategy - . testimony to the house armed services committee anthony h.

What is the Schlieffen Plan? - . it was a plan that ensured a quick “42 day” victory over france before their ally,