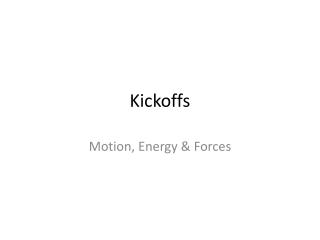 AHSAA Football Mechanics Basic Mechanics, Keys and Responsibilities for a Crew of 7 2011 Football Season - . why use

Approved Football Officiating Mechanics - . six types of kicking plays revised: 7/30/13. *how to use this presentation*.

Kicking - Ryan logan-magnusson. kicking. what is a kick?. using one’s foot to strike an object with enough force to

Kicking - . projecting an object by striking it with the foot must have the perceptual abilities and coordination to make

KICKING GAME - . key rules for the kicking game. types of kicks categories of kicks opportunity to catch a kick illegal

Quote of the month: - . “regardless of the outcome of the current membership standards policy discussion, one thing is

Special Teams - . kickoffs you can count on. derek a. “coach” wade. syllabus. why i like kickoffs basic kickoff

Three ways to kick a football - . by: china jones. introduction. there are three types of kicks in the sport of football;