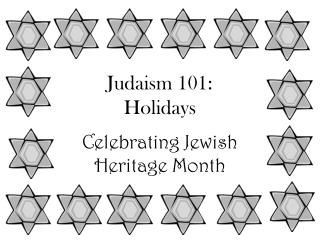 Judaism 101: Holidays. Celebrating Jewish Heritage Month. When Holidays Begin…. All Jewish holidays begin the evening before the date specified on most calendars. This is because a Jewish "day" begins and ends at sunset, rather than at midnight. Work on Holidays…. JUDAISM 101 - . is “jewish” a religious or ethnic identity?. orthodox judaism - a child born to a jewish mother or an

Judaism 101 - . mr. richards global studies. according to most historians, judaism began around 2000 bc when abraham

Judaism 101 - . what is judaism?. is judaism a religion ? clearly, there is a religion called judaism , but many people