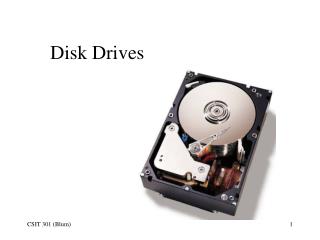 Disk Drives. Geometry Review. A platter is divided into concentric circles called tracks . The tracks are further divided into arcs called sectors . A sector holds 512 bytes of data. There may be additional bytes for servo information. Disk Drives - . storage vs. memory. because rom is read only and ram is volatile, we need something else to save our work