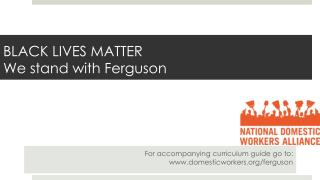 Black Lives Matter Apple Watch Band - The time has come for us to finally embrace the concept, the notion, the reality

Together We Stand!!! - . by: lekila washington. ¿speak?. i’m tired of being sick and sick of being tired tired of

WHERE WE STAND - . education reform and funding in washington state. where do we really stand?. today’s focus on

WE May Stand Out But… We Stand Together! - . video intro…. &quot;to practice brotherhood, honor agricultural

Where We Stand - . at this point we know how to: convert points from local to window coordinates clip polygons and

Where We Stand - . so far we know how to: transform between spaces rasterize decide what’s in front next deciding

Where do we stand? - . little motivation to consolidate financial crime detection/prevention silos - that’s not how we

We stand by you - Innovative approaches to rural financial services provision with emphasis on smallholder producers: the

What we stand for - . introducing subsea north we focus on emerging markets. we improve the running services and the

We stand by you - Corporate plan presentation to the portfolio committee 04/09/2007. we stand by you. turnaround

Where do we stand ? - Global overview of marine fisheries by s.m. garcia and i. de leiva moreno (fao fisheries