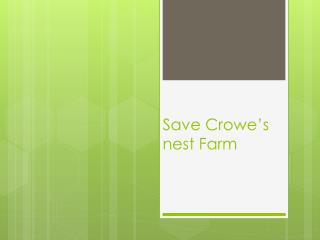 Save Crowe’s nest Farm. Our plan is…. Too have a water tower close to Crowes nest farm and run pipes to several lakes and if they run low on water they can get water from the water tower We also have the plan of having a greenhouse so the animals that eat plants don’t run out of water. . Mr. Kubeny’s Million Dollar Pre$entation - . what are some frequently asked questions about $?. 1. when should i save?

Animal Farm, by George Orwell - . adapted from version by darren leu. what is the tone of animal farm ? how do you know?.

One Flew Over The Cuckoo’s Nest Ken Kesey - . the novel. a counter-culture protest novel, which is an allegorical

Serious Farm - . *robust vocabulary*. created by: agatha lee march 2009. acquired. if you own or buy something, then you

Animal Farm Chapter Ten - Animal farm" chapter ten. question 3 - throughout the book, there are suspicions about