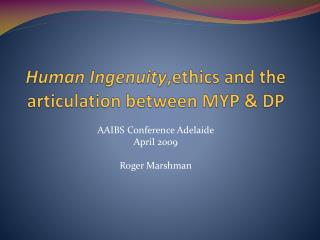 Human Ingenuity ,ethics and the articulation between MYP & DP

Human Ingenuity ,ethics and the articulation between MYP & DP. AAIBS Conference Adelaide April 2009 Roger Marshman. The 2002 Adelaide Challenge. What has the MYP to say about values? Implication of constructivism

Human Ingenuity ,ethics and the articulation between MYP & DP

The Principles of Peace The Centrality of Marriage and Family - . u p f. the primary human institution . the family is

The State Ethics Law and You - . presented by: deborah danner, senior counsel march 2, 2006. overview of the course.