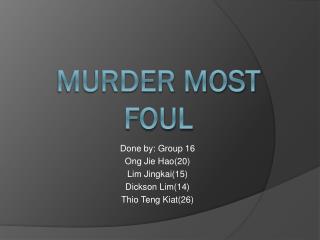 The Dodo verdict - . luborsky… everybody has won and all must have prizes are we in an alice in wonderland

Crime Scene Investigation - . crime scene investigation : main goal is to gather evidence that can be used to identify

To be OR not to be? That is Not the question, The Temptation is this! shamloo - . بودن یا نبودن. مسئله

Crime and Cyber-crime - . pieter hartel. crime. acts or missions forbidden by law that can be punished […] , against:

Revenge - Ghosts, perverse family drama, and a vow of revenge: hamlet is all geared up to be a traditional bloody