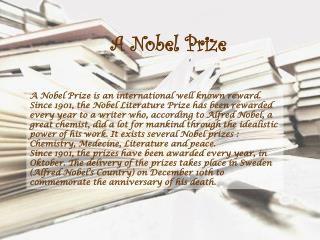 Nobel Prize winners - The winners of the prestigious nobel

Nobel Prize in Physics 2011 - . saul perlmutter supernova cosmology project berkeley, usa. “for the discovery of the

“What's graphene , and why is its development worth a Nobel Prize?” - Biochemistry throwback why carbon is so