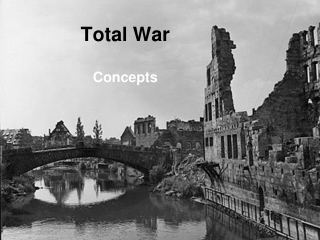 Total War. Concepts. Concept introduced by Arthur Marwick. Theory to contrast the war with the limited wars of the 18 th Century. He used the concept of “total war” to refer to: a. Its all-encompassing character b. Its severity. c. Total mobilization of the nations’ resources for victory Total Control CMS - . a webinar by paperstreet. total control – a brief overview. what is a cms? what is total control

Total War - . what is total war?. make any sacrifice in order to achieve victory direct all resources and economy towards