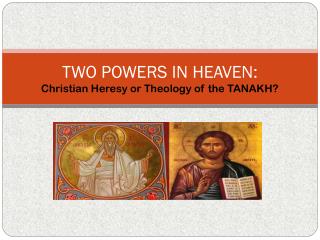 TWO POWERS IN HEAVEN: Christian Heresy or Theology of the TANAKH?

TWO POWERS IN HEAVEN: Christian Heresy or Theology of the TANAKH? “The basic heresy involved interpreting scripture to say that a principal angelic or hypostatic manifestation in heaven was equivalent to God.” The idea of the 2 nd power was not considered heretical until the 2 nd century C.E.

TWO POWERS IN HEAVEN: Christian Heresy or Theology of the TANAKH?

Toward Independence - . chapter 5. read 5.1. introduction. what powers did colonial government have in the 18 th

Unveiling The Mystery of the GODHEAD - . a presentation by: ptr. ronnie millevo. denominational belief no. 1. trinity