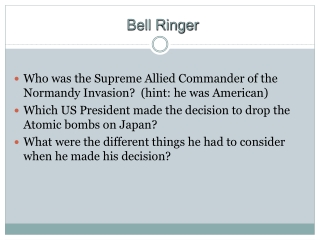 Bell Ringer. Who was the Supreme Allied Commander of the Normandy Invasion? (hint: he was American) Which US President made the decision to drop the Atomic bombs on Japan? What were the different things he had to consider when he made his decision?. Post WWII. Recovery. Today in class….