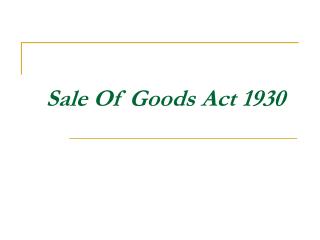 Sale Of Goods Act 1930. Section 4 – Sale and Agreement to Sale. The contract of sale of goods is a contract whereby the seller transfers or agrees to transfer the property in goods to the buyer for a price. There may be a contract of sale between one part owner and another.

Sale of Goods Act, 1930 - . a contract of sale of goods is a contract whereby the seller transfers or agrees to transfer

Sale of Goods Act, 1930 - . introduction. the law relating to sale and purchase of goods, prior to 1930 were dealt by the

THE SALES OF GOODS ACT (1930) - . introduction. before the sales of goods act,transactions relating to sales and purchase

Sale Of Goods Act Case Studies - In this presentation we will see the case studies regarding sale of goods act. barrow

The sale of goods - . general on sales law in the eu. the cisg european member states and reservations coverage: business

Lesson 3: Sale of Goods and Supply of Services Act 1980 - . part 2: the responsibilities of the retailer. overview of

Lesson 2: Sale of Goods and Supply of Services Act 1980 - . part 1: your rights as a consumer. overview of lesson.

Contracts and Sale of Goods