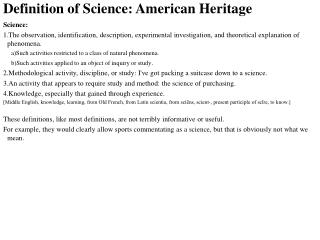 From Heritage of Astronomy to Space Technological Heritage: A Perspective - . by dr. olga dluzhnevskaya, director of the

An Introduction to the History of Scientific Ideas in Western Culture (Talk 1) - . a summary of greek science and its

Definition Paragraphs - . what is the purpose?. to expand a definition by giving further explanation and examples. when

Defining Race - . definitions and ideologies. class exercise: definitions. write a definition of race. be as precise as