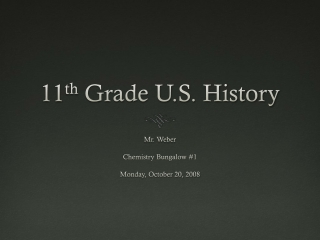 11 th Grade U.S. History. Mr. Weber Chemistry Bungalow #1 Monday, October 20, 2008. Activator. What do you think of U.S. intervention in Iraq? What does it mean to be a “World Power?” How is foreign policy connected to economics?

Questions &amp; Desires - . a lecture on my own work tracy k. smith.

Cornell - . notes. the hidden curriculum. quickwrite questions :. how did you learn the skill of note taking? how did

Diversity - . diversity. differences, variety differences that play a role in &amp; impact culture what are our

Famous People Quiz - . the next few pages will test your ability to figure out what celebrities majored in what academic

Puerto Rico - . by azaria and devin. located. puerto rico is located in caribbean between the caribbean sea and north