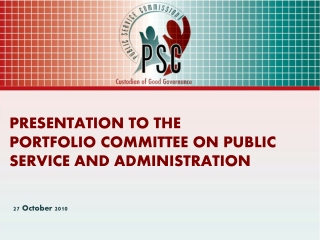 PRESENTATION TO THE PORTFOLIO COMMITTEE ON PUBLIC SERVICE AND ADMINISTRATION

PRESENTATION TO THE PORTFOLIO COMMITTEE ON PUBLIC SERVICE AND ADMINISTRATION. 27 October 2010. INTRODUCTION. The Public Service Commission (PSC) has been requested to brief the Committee on the implementation of section 195 of the Constitution , 1996, by the other entities reporting to it

PRESENTATION TO THE PORTFOLIO COMMITTEE ON PUBLIC SERVICE AND ADMINISTRATION