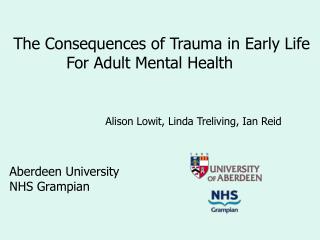 Research at The Royal Cornhill Hospital The Consequences of Trauma in Early Life - For adult mental health. aims the

Life Coach For Mental Health - A professional development coaching helps us in our daily life and also career. it

What are the economic consequences of adult ill-health in Russia? - . marc suhrcke msu@ihd.euro.who.int who european

Trauma and Mental Health in ELL Children - . dr. valerie sartor. how can schools can foster resilience and well-being in