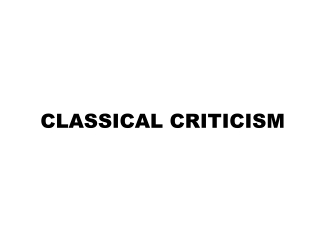 CLASSICAL CRITICISM. A classic should comprehensively represent the spirit of the nationality it belongs to and have some claim to universal meaning as well to deal with the questions of general philosophical importance. In the 20 th century the critics used to carry out two practices

Satire - . noun . a literary manner which blends humor with criticism for the purpose of instruction or the improvement

Criticism - . criticism – the act of criticising, especially adversely adversely – acting or serving to oppose the

Literary Criticism - . reading and summarizing a literary criticism. any work with a unique aesthetic quality. texts that

The Function of Criticism - When i want your opinion, i’ll give it to you. the function of criticism. thesis:.

Language Criticism and the Usage Panel - . the role of language criticism in a multicultural society. today’s