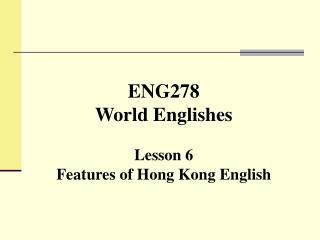 World Englishes Lesson 5 - . elf – english as a lingua franca. the spread of english as an international lingua

World Englishes - . nov 5, 2008. activity 1. listen to the following speakers and rate them on the characteristics

World Englishes Unit 6 (CL) - . inner circle englishes. the help. which characters did you find most likeable and

Chapter 6 Old Hong Kong - . these were the taxis in the old hong kong. sedan chair in the past. the pier in the past.