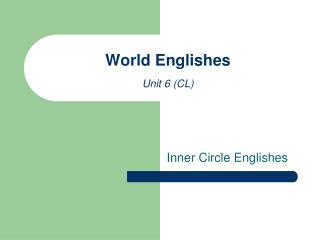 World Englishes Unit 6 (CL). Inner Circle Englishes. The Help. Which characters did you find most likeable and sympathetic? To what extent do you think a person’s flaws, such as racist attitudes and behaviours, can be forgiven because it is the norm in the surrounding culture?