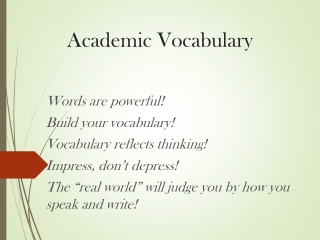 Academic Vocabulary. Words are powerful! Build your vocabulary! Vocabulary reflects thinking! Impress , don’t depress! The “real world” will judge you by how you speak and write!. Important Info…. 6 Easy Tips You Should Add to Your GRE Vocabulary Practice - The first step towards your gre vocabulary is to read books,

Vocabulary Practice - First day jitters. vocabulary practice. meet me ______ when you are ready to leave. trudged

Let’s Practice with ALL of our Mineral Vocabulary… - . with your shoulder partner, please complete the following

Vocabulary Unit 3 - . quiz answers- practice context clues. 1. you could have indicated frankly what you thought was

Lunch Money Vocabulary Practice - . feature. verb to give special attention to the concert will feature a flute solo.

Power Practice for use with Vocabulary Power Plus for the New SAT - . book one 21 lessons 275 words. introduction to