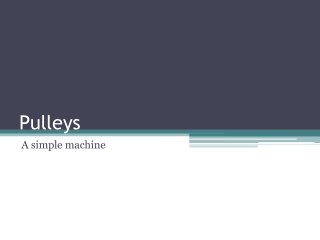 Pulleys. A simple machine. What is a pulley?. A pulley is a wheel A pulley uses rope that goes around the pulley in its groove The rope attaches to objects Force is applied to the other end of the rope. Why use a pulley wheel and not just rope looped around the beam?.

Simple Machines - . group bb. a simple machine:. wedge. what is a wedge?. a wedge is an object with at least one slanting

Simple Machines and Mechanical Advantage - . sps8e – in 33 physical science ms. lockhart. what are the six simple