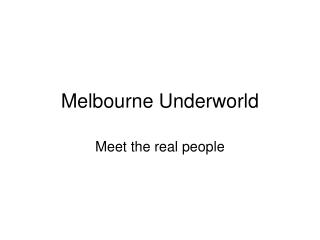 Ready to Enjoy Spring in Melbourne? - Whether it's gardening, spring cleaning, learning something new, having a makeover,

Security companies Perth - If you are looking to protect your business or residential property, must visit our website: Who was “Squizzy” Taylor and how did he influence life in Richmond - . written by camron merjan. who was squizzy

the gangster we are all looking for - . blood, water, &amp; butterflies. author’s note  “and so i kept my

Gangster - . what is the gangster genre?. gangster films are about gangsters who seek out power and wealth. the main plot AENEAS AND THE UNDERWORLD - . bk 6. answer these questions as statements. who built the temple to apollo and what scenes Office Cleaning - Try this site http://www.sparkleoffice.com.au/cleaning-services-melbourne.html for more information on