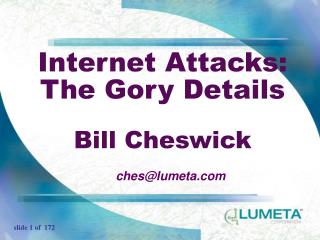 Internet Attacks: The Gory Details Bill Cheswick ches@lumeta.com The Internet Ad hoc collection of TCP/IP interconnections No real central authority No central knowledge of connections maybe flows, but not yet No per-packet billing, in most places

Welcome to Internet &amp; E-Mail - . instructor: heman lee www.aeromaniacs.com/class hemanlee@live.com. what is the

Security - . 9.1 the security environment 9.2 basics of cryptography 9.3 user authentication 9.4 attacks from inside the

A History of the Internet - . or, how al gore kind of invented the internet. drumroll, please…. 1969 advanced research

The Internet - My New BFF - . topics of discussion. then vs now what are your kids doing? are things really that

Networking with TCP/IP and the Internet - . objectives. discuss additional details of tcp/ip addressing and subprotocols