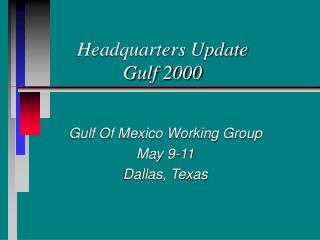 War with Mexico - . new mexico was the name of the vast region between the texas and california territories. (new mexico,

Local Gulf of Mexico fish identification Test YOUR SKILLS! - . you need to be able to identify these fish:. atlantic

The Persian Gulf War I (1991) War On Terrorism including: 9-11 Afghanistan - Operation iraqi freedom the axis of evil