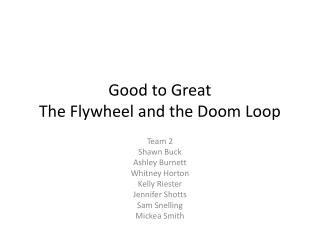 Good to Great The Flywheel and the Doom Loop

Good to Great The Flywheel and the Doom Loop. Team 2 Shawn Buck Ashley Burnett Whitney Horton Kelly Riester Jennifer Shotts Sam Snelling Mickea Smith. Build up and Breakthrough. What was the one push that made the flywheel go so fast?

Good to Great The Flywheel and the Doom Loop

nearingzero/nz393.jpe - Http://www.nearingzero.net/nz393.jpe. el niño. any comments on the video?. sorry about the

writing GREAT headlines - . beginning journalism. headlines are important…. they tell the reader what the story is

POWER PRESS OPERATOR TRAINING - . power presses …. have a flywheel operate by transferring energy from a rotating