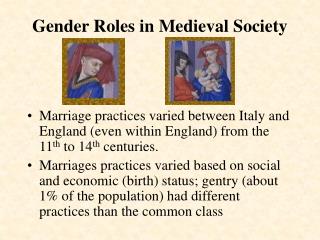 Gender Roles in Medieval Society. Marriage practices varied between Italy and England (even within England) from the 11 th to 14 th centuries.

Daily Life, Gender Roles, and Education in Ancient Egypt - . homes. close to the nile made of mud bricks usually 2-3

Medieval History - . please take out a sheet of paper and create cornell notes. if you need an example of cornell notes,

Medieval Japan - . “the way of the warrior”. japan’s warrior society. feudalism and the samurai like europe, japan

European Medieval Feudalism - What were the relationships that existed in the european feudal system?. feudalism:.

Education in Medieval Europe - . manuscripts. in the middle ages, books were made by hand by monks illumination—highly

MEDIEVAL EUROPE REVIEW - . what was the political system in medieval europe that was based on the bond of loyalty between

Gender Roles - . what place did men and women have in society?. were men the bosses?. it is very important to realise

Medieval Law - . ideas for today. what similarities/differences can we see between the canadian law system and medieval