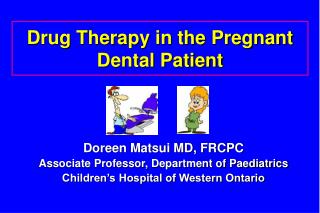 CRRT Therapy in the Pediatric Critical Care Patient - . an overview of common complications and solutions for pediatric

The History of Drug Therapy in America - . source: the $800 million pill: the truth behind the cost of new drugs. early

EVALUATION OF THE DENTAL PATIENT - Diagnosis. diagnosis: is a fancy name given to the process of identifying diseases. it