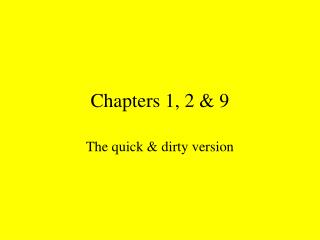 Physiology Exam 1 Study chapters 1-5 - . the cytoplasm includes all material inside the cell membrane except

Section 1 Chapters 1-4 - . what is the caption of the poster on the wall?. big brother is watching you. what are the four

Revelation 7 Churches (Chapters 1-3) - . revelation 1:1-20 the revelation of jesus christ, which god gave unto him, to