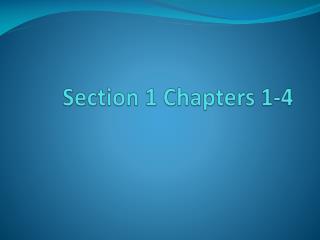 Section 1 Chapters 1-4. What is the caption of the poster on the wall?. Big Brother is watching you. What are the four ministries of government and with what are they concerned?. Ministry of Truth ( Minitrue ): news, education, entertainment, fine arts

Chapters 1-4 - Geography unit one. chapters 1-4. location. location: where something is . absolute location describes the

Chapters 1-4 - Geography unit one. chapters 1-4. location. location: where something is. absolute location describes the

Chapters 1-4 - Geography unit one. chapters 1-4. location which way is north?. location: where something is. absolute

Chapters 1-4 - Allegory-a story that can be read on two distinct levels. characters and events in an allegory represent

Chapters 1-4 Review - . by april senger fos. what do we call an educated guess?. fact law theory hypothesis. what do we

Chapters 1 to 4 - . 1. what plot exposition does shelley offer the reader in these chapters? shelley provides the reader

Chapters 4 (Sec. 1) - . federalism -- is a system of government in which a written constitution divides the powers of

Entrance Ticket #1 (Chapters 1-4) - . list 5 things thomas has learned about living in the glade. which one of these

Section 1-4 - Click the speaker button to listen to the audio again. section 1-4. building support for imperialism.

Section 4-1 - . chemical energy and atp. organisms are classified according to their energy usage:. autotrophs – make

Section 1-4 - . critical thinking. a quote from the

Section 1 -4 - . observational and experimental studies. objective 6: explain the difference between and observational