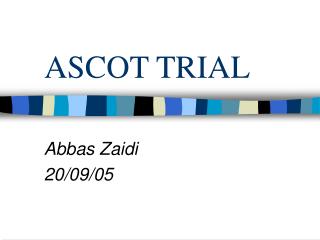 ASCOT TRIAL. Abbas Zaidi 20/09/05. Hypertension is one of the most prevalent risk factors for cardiovascular disease, affecting as many as 800 million people worldwide.

PPARGC1β is a Genetic Determinant of the Cardiovascular Risk Factor, Thromboxane A 2 – - An anglo-scandinavian

ALLHAT - . role of diuretics in the prevention of heart failure - the antihypertensive and lipid-lowering treatment to

ALLHAT - . blood pressure control in hispanics in the antihypertensive and lipid-lowering treatment to prevent heart

Central blood pressure: what do we really know today? - . significant and highly variable difference between aortic and