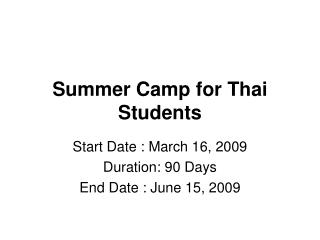 Thai Market By ING 4E - . meat. in thai markets, meat is often sold in the open air . no refrigeration . sometimes the

Opportunities for college-intending students at risk for “ summer melt ” - . research made possible by support from

Summer Camp 2012 Resica Falls, PA Maximum Participation!!!! - Some or all these slides maybe posted on bsa55.com. a

Summer Camp Adventure Game for Kids for FREE at Google Play - We all had summer vacation, so let's plan for the summer

TOUR SUGGESTIONS - . clark-subic-tarlac and beyond. clark/angeles city tour (o/d). center for kapampangan studies at the