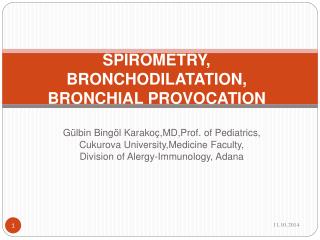 Provocation - . - words or actions leading to killing of another person under hot passion and without deliberation -

Provocation - . defined in s3 of the homicide act 1957 as: “where on a charge of murder there is evidence on which the

Spirometry - . what is it? why do we use it? what types of spirometer are there? what is“good practice”. spirometry.

SPIROMETRY - . spirometry is the measurement of the flow and volume of air entering and leaving the lungs. static lung

DYNAMIC SPIROMETRY - . dr. taj. what is spirometry ?  it is a measurement of the breathing capacity of the lungs.

Criminal Law Provocation - . provocation. violence often involves words or actions by the victim which contribute or