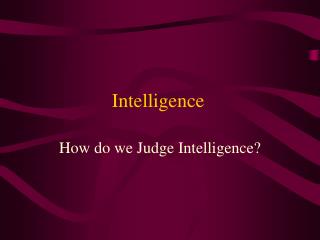 Intelligence . How do we Judge Intelligence?. From the following list of candidates, select the five that your group believes to be the most intelligent – explain the criteria that was used. Charles Darwin Mother Theresa Shakespeare Madonna (singer) Adolf Hitler Sigmund Freud Artificial Intelligence - . search problem (2). oracle path. uninformed and informed searches. since we know what the