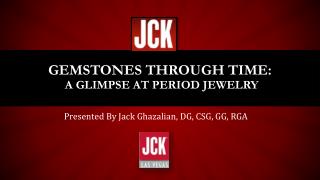 Gemstones Through Time: A Glimpse at Period Jewelry Gemstones Through Time: A Glimpse at Period Jewelry. Presented By Jack Ghazalian, DG, CSG, GG, RGA. Over 100,000 Years of history.

Gemstones Through Time: A Glimpse at Period Jewelry

Preparing for the Opet Festival - . ancient egypt. clothing. t ypically made out of white linen because it was a cooler

Art and imperial power - . art flashcards. europeans in africa. interrelationship between europeans and africans and the

The Dark Romantic Period (1800-1860) - . powerpoint by: sarah nick and cameron. dark romantic period. this was around the

Gadgets, Things, and A Glimpse of the Future - . introduction. driven by advances in electronics, information systems

Ancient Greece 750 BC – 146 BC Archaic Period – Hellenistic Period - . by kelly bryant. what will we learn in this