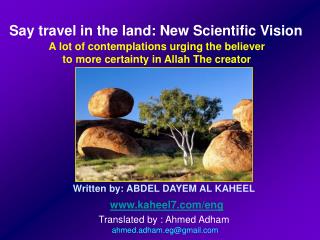 written by Nicky Sulter - . the noise in the night. illustrated by jo

Written by: Eustorgia Navarrete - Who am i. written by: eustorgia navarrete. i come from a unique family. both my parents

Written by Don Klipstein . - The difference between a democracy and a dictatorship is that in a democracy you vote first

Written for CADRE by Abt Associates (Daphne Minner , et. al.), 2012 - Compendium of research instruments for stem

Written by Teri Crum - . jack and tim are at camp. they have to fix a tent and a raft. they use string and a stick to

Written and illustrated by - . once there was a butterfly named fiffie , she was really clever at working with computers.

Written By: Christopher Paolini - . eragon. raised by his uncle in carvahall he finds a blue stone which is a dragon egg

Written by: Angelia Greiner - . who was charles dickens?. considered by many as greatest victorian writer prolific author

Written by , Olivia Toth - The life of cleopatra the seventh. written by , olivia toth. introduction to my life as