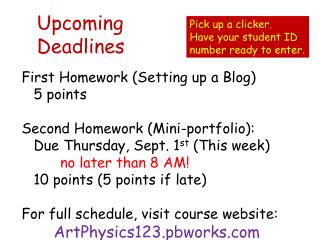 Pick up a clicker. Have your student ID number ready to enter. Upcoming Deadlines. First Homework (Setting up a Blog) 5 points Second Homework (Mini-portfolio): Due Thursday, Sept. 1 st (This week) no later than 8 AM! 10 points (5 points if late)

upcoming project in Hyderabad - The biggest news all this week when it comes to real estate is the rera. rera is to tame

Week Two Agenda - . announcements link of the week use of virtual machine review week one lab assignment this week’s