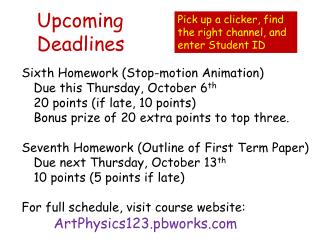 What You Need to Know about Financial Aid - . this presentation was developed and provided for free by masfaa – the m

HAVING A SUCCESSFUL SENIOR YEAR! - . august 29, 2012. education acronyms. how many of these do you know?. asvab gpa doe

My Cell Analogy Project - . biology. deadlines!!. write these down now!!! you cannot miss any deadlines!. blueprint