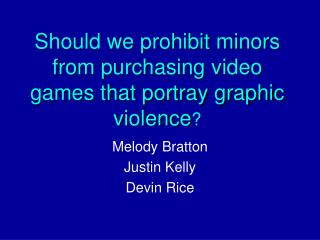 Should we prohibit minors from purchasing video games that portray graphic violence ?

Should we prohibit minors from purchasing video games that portray graphic violence ?

The Effects of Violent Video Games on Children - . by: name, college affiliation. comparative analysis. researchers had

Video Game Design - . lesson 1. game designer. person involved in the development of a video game usually works on a part

WELCOME TO THE KING OF GAMES, POLO, THE GAME OF KINGS - . tutorial: game

One of the first video games. - The difference between old and new video games and consoles and how they effect us p ower

How Violent Video Games Effect The Brain… The Good, The Bad &amp; The Ugly - . by: jeannette kosenesky eps 503.