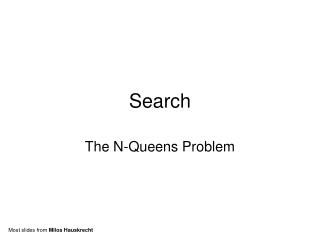 Search The N-Queens Problem Most slides from Milos Hauskrecht N-queens problem Find a configuration of n queens not attacking each other What is the maximum number of queens that can be placed on an n x n chessboard such that no two attack one another?

The Search for Everlasting Life - . by: tatyana fulmore period 1. gilgamesh. gilgamesh is the king of uruk and the hero

The Search for Significance - Anchor of hope healing rooms. the search for significance. sissy landry , facilitator.

In Search of the Yeti - . by: ben smith, jacob stokes, and will maguire. the yeti or abominable snowman is an ape-like

Wilderness Search and Rescue Awareness - Definition of wilderness search and rescue. what is it anyway?. what is search