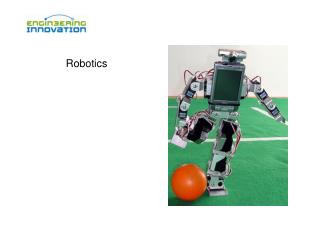 Robotics - . presented by ishani vyas cs575. what is robotics. science and technology of robots. knowledge of

Robotics &amp; Artificial Intelligence - . ai . ai is the branch of it that designs machinges , (robots &amp;

Robotics “In which agents are endowed with physical effectors with which to do mischief” 1 - . 1 russell and norvig,