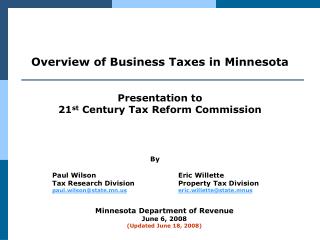 INCOME TAXES - . what does the u.s. government use my income taxes for?. average yearly income. in united states. in

Taxes - . what are taxes?. taxes are fees that support government programs and are required by law to be applied to

An Overview of Cu-Ni Deposits in Minnesota: A Geological Perspective - . jim miller department of geological sciences

NET PAY - . chapter 2 section 2-1. so where did all my $$$ go?. it disappeared because of deductions  deductions are

Taxes - . taxes. taxes are expenses that you pay everyday that are used by the local, state and federal government to

Taxes! - . financial planning – mr. yates. taxes!. in this world nothing is certain but death and taxes . - benjamin

Taxes - . “in this world nothing can be said to be certain, except death and taxes.” – benjamin franklin taxes are

POC MINNESOTA - . promoting and supporting people of color in business in minnesota. problem. the state of minnesot a is

Saving Taxes for Your Business - . this is the story of tim ‘the tool man’ taylor. after 20 years working for the

What Are Taxes? - . how are taxes used to fund government programs? what are three types of tax structures? what are the